The Best Train Adventure for Dogs

I anticipated Fall to be so great this year.  I had plans to go to a dinner theater, take Sybie on a train ride for her birthday, go to Disney World for the Food and Wine Festival, and even run my first race since 2019!  Not to mention that the weather is just always so beautiful here in Fall, so I looked forward to walking and running on my favorite trail. It was going to be a great time of year!

Instead I ended up getting very sick and was laid up in the house for several weeks. I totally missed the transition to fall,  the trip to Disney, the race, and all the peaceful walks/runs on my favorite trail.  As I recovered I developed some health problems, and then one of my good friends whom I loved very much got sick and passed away very quickly.  What is suppose to be such a great time of year turned out to be one of the lowest points in my life.   It's been tough.  But before all this happened, I am thankful that we did get to take Sybie on an adventure for her 2nd birthday. It's the little things! 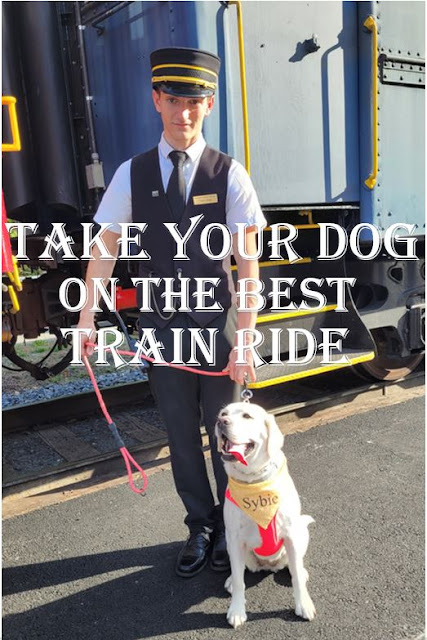 How it started: Over the summer we discovered that Sybie was intrigued by trains.  Every time she would hear a train, she would stop what she was doing and stare so intently in the direction the sound was coming from. If you've ever seen a lab stare so intently, it is the cutest thing.

I started to research passenger trains that were dog friendly.  I saw a random post on Instagram of a couple that took their two retrievers on a train in the Lehigh Valley, so I began to investigate that.  Shortly afterwards we made plans to ride the Lehigh Gorge Scenic Railroad.

The Lehigh Gorge Scenic Railroad is located in the quaint town of Jim Thorpe, Pennsylvania. When riding the train you have two options.

You can ride in a standard coach car ( a standard passenger train car), or an open air car.

The open air car reminded me more of a train you might see in an amusement park.  Instead of individual seats, it had long benches that faced the windows which were open air.

The regular operating schedule is May through December.  Most of the rides are 70 minutes long, except in October when rides are more popular. I suppose this is because most people want to take the ride during this time to see the beauty of the fall leaves. In October, the rides are only 45 minutes but there are more rides scheduled. The prices remain the same.

Because the dogs had never been on a train before, I didn't think taking the 70 minute ride was such a good idea. I thought the 45 minute ride would be best just in case we had any issues.  Some times during the year you can purchase tickets in advance, but not during October when rides are so popular.

We made our first trip to Jim Thorpe to ride the Lehigh Valley Gorge Scenic Railroad in the beginning of October.  Although I had researched all about the railroad, I did not research the town of Jim Thorpe which was a huge mistake.  When we got there, there was a huge festival going on and the streets were packed, the lines for the trains were like lines at Disney World, and there was literally no where to park!  I bet we drove around for an hour looking.  We decided to drive back home and come back another day.

Our second attempt went much better. Jim Thorpe is a little touristy town so there were still a lot of people out walking and sight seeing.  We paid to park in the train parking lot which was practically filled to capacity on this day too because of the beautiful hiking and biking trails near by.

We went right up to the window and purchased our tickets. I was worried about the dogs being in the open air train car, what if they saw a squirrel and wanted to jump out? 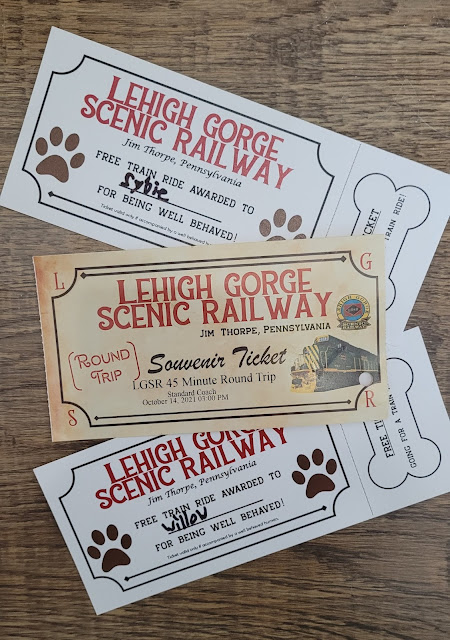 We purchased the standard fare where we each had our own seat and window to look out. The dogs even got their own souvenir tickets.

We had some time before our train departed so we walked through town and found some lunch. 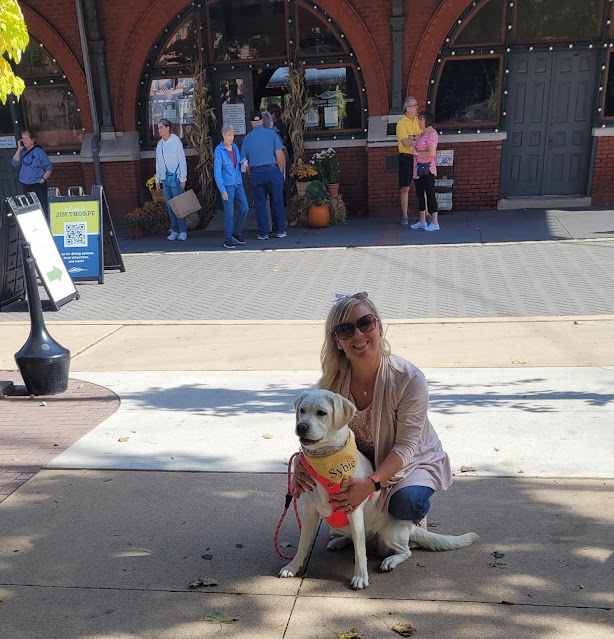 There was a town square type area in front of the train station that had benches, tables, and a gazebo.  We brought our food back and ate there. The girls sat right beside us. They were so well behaved and had many people that wanted to come up and meet them. 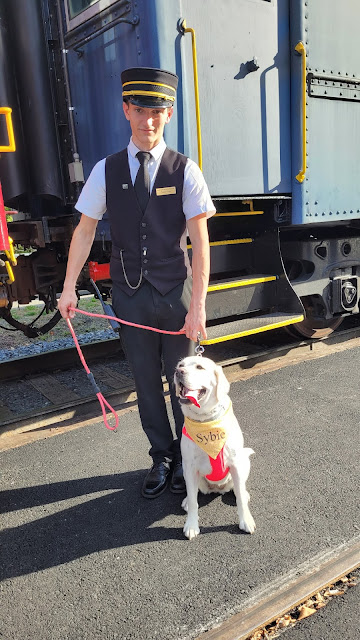 When it was our time to get on the train, we waited in line to board.   I was worried if the dogs would be able to walk themselves up the few metal steps to get on the train or if they would flip out ( like Willow did the time she didn't want to go through the automatic door at Tractor Supply).  I was planning on helping them up the steps but both of them trotted right up with ease.  We had a train ticket, but no seat assignment so it is first come first serve. 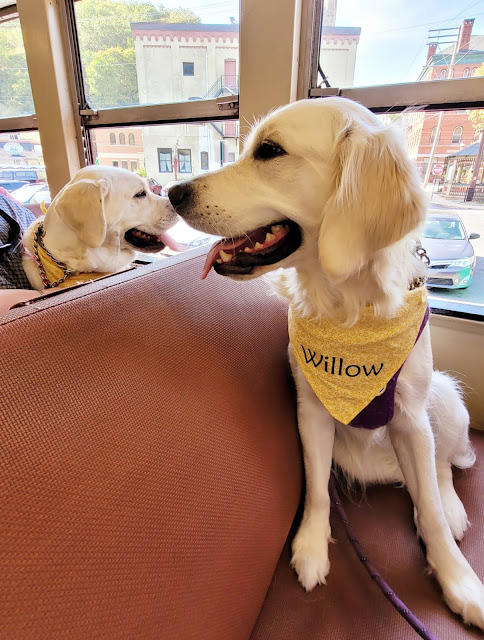 We were able to find two seats together, one in front of each other.  I sat with Willow on the way out and Scott sat with the birthday girl Sybie and then on the way back we switched. 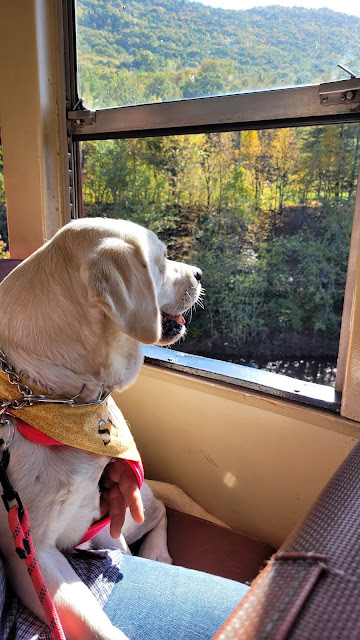 This particular train is an out and back, meaning that it does not turn around or make a loop, it just goes back the same track in the opposite direction.  Because of this, I really appreciated that the seats flipped around so you can face in the same direction you are going. I noticed that a few of the seats did not flip and I was SO grateful that we picked ones that did.  When we boarded, I didn't realize we would be coming back in the same direction and would have to flip our seats. I know I would not have been happy if I would have had to ride on the train "backwards". I don't do well with that type of motion. 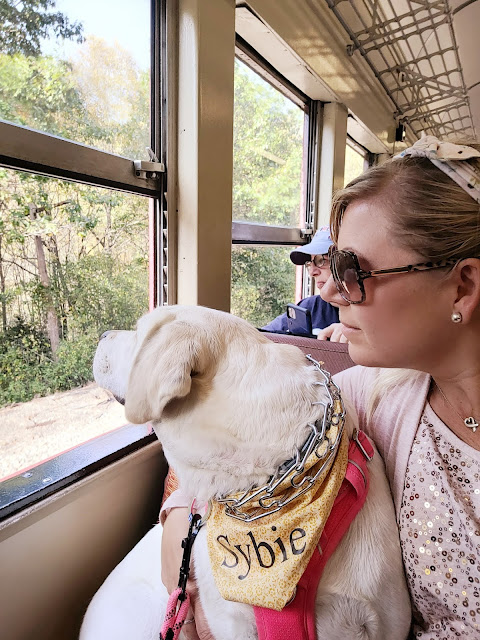 The dogs sat right next to us in our seats and they were SO well behaved. I was so proud of them. They just watched the beautiful scenery out their windows.  I think they made a few people smile too. It's not every day that you see two dogs on a train! The conductor even came up to talk to Sybie. 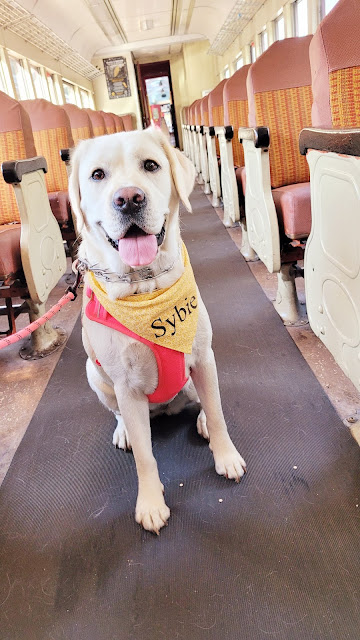 The ride was perfect.  45 minutes was just the right amount of time but now I know that they are capable of longer rides. I think Sybie really enjoyed her birthday ride, I just wish they blew the whistle more because I know she likes that!

Now I need to find an adventure for Willow for her birthday next month. Any suggestions? -M