On Sunday my friend Heather and I ran the Lucky Charm 10K. This race offered both a 5K and a 10K and when Scott found out we were running the 10K he asked why?  Do you get the same medal for both? Yes you do, I said! Then why would you run the further distance, he asked. 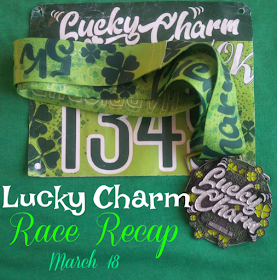 I can find a 5K around here like every other weekend but there seems to be fewer 10K's offered, especially ones that actually offer a medal.  I'm okay with running a 5K and not receiving a medal, but a 10K distance deserves a medal, don't you think? 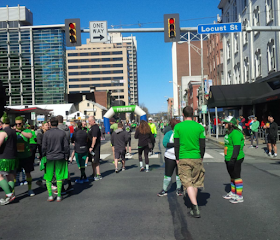 When we got there, that atmosphere was already fun and festive. It was nice seeing everyone dressed in green and some in costumes! As far as the weather, we couldn't have asked for a more beautiful day to run. 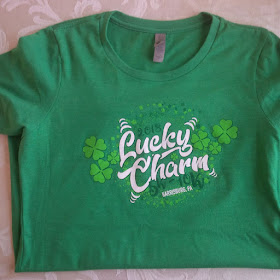 Packet pick up was available starting on Friday but we chose to just pick our stuff up right before the race. I registered for this race back in January and at the time of registration I ordered a size small race shirt. When I picked up my bib and shirt on Sunday, they no longer had any smalls left. How does this happen?  They gave me a medium instead, but turns out that ended up being a mistake in my favor because the shirts ran pretty small and the medium one fit perfect! I actually really love these shirts and the material is SO soft. They are just like the shirts that you get from Gone For A Run. At packet pick up I got to seen Ana and her son! 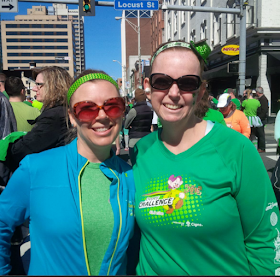 In real life, this jacket I am wearing (from the Tinkerbell half in California), looked a bit more green ( I knew it wasn't really green-green), but enough that it was a shade of blue green. Of course now that I look at it in this picture, it just looks blue! O well.  I was unsure what the weather was actually going to be like and it was a bit breezy walking to the race from the car, so I kept the jacket on. I decided to race with it on too.  It was a good decision in the beginning because it was a bit chilly running by the water, but after that, keeping it on was a BAD choice! 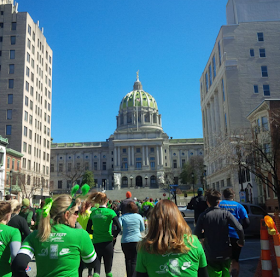 The 10K race is basically an out and back, running up one side of town and coming back on the other. It is actually a really nice, scenic course. We passed the capitol building on our way. I also saw Ana and her son again on the course cheering for runners!

I am proud of myself for starting off slow on this race. I usually start off way too fast and then am drained by the last half of the race. But turns out my slow pace just continued. I didn't end up speeding up.  My legs were feeling super tight, but I knew that I would feel this way for the first few miles and then they would loosen up like they normally do on a run.  They didn't end up loosening up till half way through mile 4!   Even though my legs felt better, I did not gain any speed! 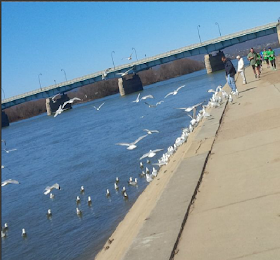 At one point in the course we looped through a little park and then made our way down near the water. I am not kidding you when I say a flock of seagulls literally grazed my head. I am NOT a fan of birds to begin with and to have like 50 of them flying right in front of me and over my head was insane.  I was actually trying to get my phone out to take a picture when I saw a professional photographer take a photo of me doing so. I must have looked like a hot mess. Can't wait to see what those race photos look like..haha.  (by the way, I ended up looking back while I was running to get this photo once the seagulls dispersed)

This course was advertised as a flat course, which it mostly was except for two spots. There was a slight hill at the half way mark,  which I sort of did not mind because at that point I was looking forward to the downward portion to hopefully gain some momentum. The second hill was going back up into town after running by the water, which I was kind of wondering how we were getting back up there and figured there was going to be a hill. 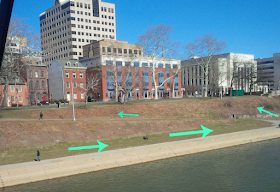 I took this picture after the race and realize now that I did not capture the complete incline. It  wasn't a big deal, but just not something I was happy about seeing at the end of mile 5 of a 10K race.

The finish line was up the incline and around the corner. 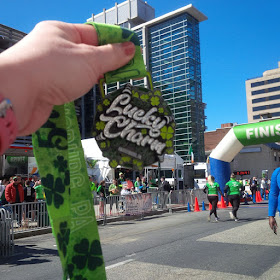 I was not sick for this race, nor was I injured, yet I earned one of my slowest finish times for a 10K race.  All I can say is I was over dressed and under trained. That's it. There are no excuses. It was a beautiful day and a great course overall. 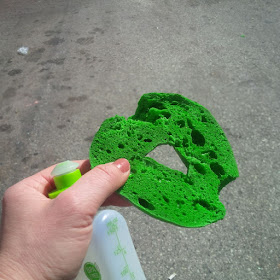 Afterwards we were treated to green bagels, and cups of Lucky Charms.  There were also Jimmy John sandwiches but the line was too long to wait in and I wanted to go meet my friend. 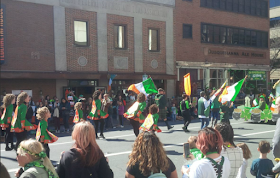 We then found a seat to watch the the festivities continue with the St. Patrick's day parade. The atmosphere was so festive and fun and it was a great way to spend the afternoon.  I would actually consider this race again in the future.  -M 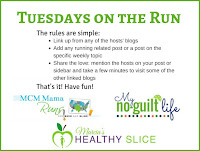 We are linking up with the gals from TOTR.