If the Disney Princess lived in the United States, Where would they live?

Welcome to Thinking Out Loud Thursday. Today is just a day to be completely random.
The thought for this post came about while we were working in the yard one day. Isn't it amazing what random stuff we come up with...lol.  But really, it should be no surprised to you that we came up with this post since we love Disney so much! 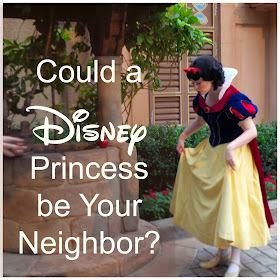 Okay, so if the Disney princess lived in the United States, where would they call home?  This is all in good fun of course.

1. Snow White : Since she lived with 7 little men that worked in the coal mines, we thought she would probably live somewhere in West Virginia.

2. Aurora (Sleeping Beauty): She would live in the sleepiest city in the United States, Seattle of course!

3. Bell (Beauty and the Beast)She'd find her home among all the other "Southern" belles in Charleston, South Carolina!

5.Tiana ( Princess and the Frog): She would live in New Orleans. There really isn't any doubt about that.

6. Rapunzel: She of course is use to being in high places so somewhere with high altitude would suit her fine. We think she would make her home in Colorado. Maybe in Denver.

7. Merida: Although she is originally from Scotland, we think she would make her home somewhere in Montana. They have a good population of bear there and she'd have lots of places to shoot her bow!

8. Jasmine: Since this princess is use to warm climates, we thought she would do well living in New Mexico. Besides, she already enjoys looking for magic carpets, maybe she will enjoy looking for UFO's.

9.Pocahontas: And just because we don't want to re-write history, we will keep Pocahontas in Virginia!  Maybe some day she'll make it down to the beach!

10: Mulan: For no particular reason, we thought Mulan might be happy living in California. Maybe in San Francisco?

While we were doing this post, we looked up a list of Disney Princess so we were sure not to forget anyone. While doing that we cam upon some interesting facts.

* There are 11 official Disney Princesses and 2 unofficially in waiting. Can you guess who the ones in waiting are? Anna and Elsa of course ( and of course if they made their home in the U.S, they would live in Alaska, right?)

*Cinderella is suppose to be the "leader" of the Princesses.

*Ariel is the only one to have ever had children.

*Merida is the only princess that didn't have a love interest.


So thanks for having fun with us today!
If these Disney Princess did live in the United States, which one would you live near?
Do you have any other random facts to add?


Don't forget to enter our GIVEAWAY that is still going on.
Fairytales and Fitness at 6:30 AM
Share